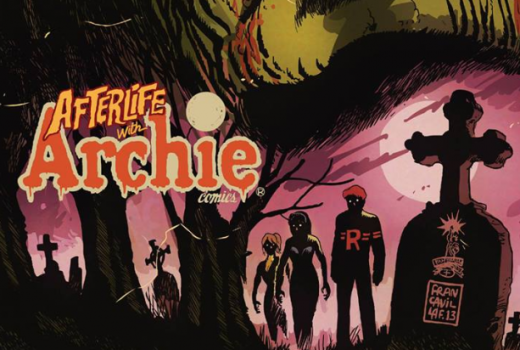 When you think of Archie Comics you think of malt shoppes, bowties and sweater vests and PG rated love triangles. The things that don’t spring immediately to mind are zombies, ghouls, gore and edge of your seat terror. Yet it’s all of these things that make Afterlife With Archie an overwhelming success. Taking the horrible and horrific things that go bump in the night and putting them in America’s favorite little town is an exciting combination that has yielded quite a fun little story so far.

Afterlife With Archie starts with the death of Hot Dog, Jughead’s beloved canine companion. Grief stricken, Juggie heads over to Riverdale’s resident witch Sabrina looking for a way to save his friend. Reluctantly and against her aunts’ wishes Sabrina brings him to a pet cemetery and, after man’s best friend is buried by his owner, reads an incantation from the Necronomicon to bring Hot Dog back to the world of the living. But even though her intentions were pure, only wanting to help a friend, Sabrina starts a chain reaction of dire consequences. Once her aunts find out what she has done Sabrina is banished to an alternate dimension as punishment. The punishment for our world is much worse though.

Hot Dog returns to Jughead, but as a zombie. Jughead is bitten and begins slowly dying from the zombie infection. Once he dies and rises as a zombie all hell literally breaks loose. Jughead begins his trek to the Halloween dance being held at the high school infecting numerous people along the way. Soon Principal Weatherbee and Miss Grundy can be counted amongst the unlucky many that have crossed paths with the zombie Jughead.

At the dance itself we see the teenagers from Riverdale having a grand time, living it up, oblivious to the terror about to come. Once the zombie horde hits the gymnasium and begins chomping away at the living, our core cast of characters beats a hasty retreat to the only safe citadel they can think of – the ultra-secure home of Veronica Lodge. But even there the zombie plague manages to assail our survivors, both from within and in the form of the Jughead-led heard of the undead about to strike from outside.

Roberto Aguirre-Sacasa has hit a home run with this series. The pacing is slow but very intense. And the narrative doesn’t just stick with the main cast of kids. We do get scenes depicting a myriad of minor characters from the Archie Universe, from Cheryl Blossom and her possibly incestuous relationship with her twin brother Jason the Lodge’s watchful and faithful butler Smithers. There are times when all we get for a certain character’s story is two or three pages, but in those pages Aguirre-Sacasa shines and it never feels like a throwaway segment. More known for his work on the TV show Glee or the recent remake of Carrie, RAS is a perfect fit for this series, knowing when to let you catch your breath and think you’re safe only to pump up the horror as he sets the monsters on your tail.

The artwork by Francesco Francavilla is very moody and extremely creepy. From the sagging, almost dripping skin of the shambling zombies to the haunted looking forests to the sight of Pop’s Chocklit Shoppe burning, every panel is meant to bring out an utter feeling of despair and hopelessness. To see small town America become overrun can truly sadden one’s soul. Francavilla’s art evokes the memory of the old EC horror comics like Tales From The Crypt or Vault Of Horror. He is a throwback to the pre-code days of scary comic art and I can’t think of any higher praise to give him than that.

One of the things that I love about this series as much as the horror aspect is how much the creative team injects heart and soul into certain scenes. So far the one that stands out the most is when Archie goes to his house to check on his parents and make sure that they’re okay and he’s confronted by the zombie Hot Dog. All of a sudden Archie’s dog Vegas appears and leaps in front of his master to protect him from the undead pooch. Peppered through the opening pages and during the canine battle are pages depicting Archie and his family adopting Vegas and how much Archie has loved him throughout the years, earning his dog’s love and devotion to the point that Vegas is willing to sacrifice his well-being for Archie’s safety. Reading the caption boxes with Vegas’ inner monologue I was immediately reminded of Grant Morrison’s WE3 and how human the animals felt on those pages. And then, without a chance to catch our breath, Archie is searching his house and contemplating what he may have to is his parents have been infected. This was a sieve, draining me emotionally.

I absolutely love comics that have a little bit extra to them, justifying the (sometimes) over-priced cost. If I’m paying upwards of $4 for a comic I want my money’s worth, not some part X of 6 trade paperback chapter. I adore Ed Brubaker’s Criminal from Marvel’s ICON imprint. I was turned on to so many wonderful noir movies and pulp authors through the guest authored essays that were in the back of each single issue. And they were only in the single issues, thereby rewarding the monthly supporter of the book. Afterlife With Archie has recently been doing two page black and white EC style horror stories with morally twisted endings in the back of each issue. These are the perfect “dessert” ending to the “main course” that you just read. I don’t know if these are included in the first trade paperback collection, but if they aren’t this is the reason to hunt down the individual single issues.

Even though only six issues (as of writing this) have been released so far Afterlife With Archie easily ranks within my top twenty-five comics of all time. The writing and art gel extremely well. The coloring is dark and sets an effectively dreary mood. And the series has proven popular enough to branch out into an ongoing Sabrina horror title as well.

The first five issues are available in a trade paperback which collects the first full storyline. The sixth issue shows us where Sabrina landed after having been exiled for helping Jughead with dark magic, almost a “zero issue” for her new series. Do yourself a favor and read this now. You won’t regret it.