FINAL UPDATE 4:30PM EST: The Full List of thirty theaters is below. The trailer will appear on all films Thanksgiving weekend at these theaters. After that the trailer will be available in December nationwide. I’ll be purchasing my ticket as soon as they go up for the first Boston Big Hero 6 show.

An early 88-second tease of Star Wars: The Force Awakens can be seen in 30 theaters across North America beginning Friday morning, November 28. Following this weekend, the tease can be seen in theaters around the world this December.

Check out StarWars.com’s complete list of theaters playing the tease below! 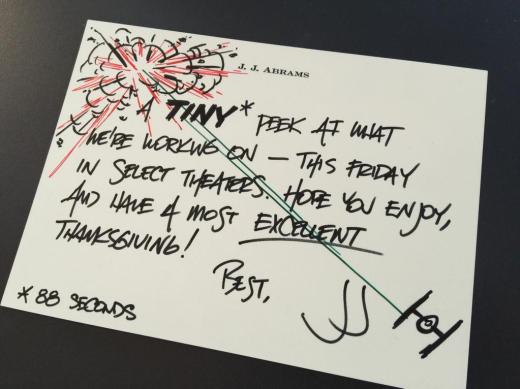 UPDATED 1:40PM EST: Official Confirmation from JJ Abrams via the Bad Robot Twitter account that the trailer will arrive Friday in select theaters and that it has a run time of 88 seconds.

Update 10:56AM EST: Regal has taken the Star Wars announcement off of their main page but the link below still brings you to their announcement. There’s rumblings that Regal broke an embargo about the announcement. No confirmation on this yet though.

Regal Cinema has announced that the trailer for Star Wars: The Force Awakens will be included before every film this Friday in 9 locations: 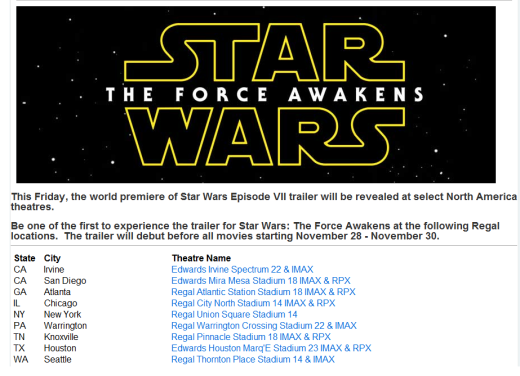 I’m sure these won’t be the only places that the trailer will be available. Most likely, these are just the only theaters showing it in front of every film.

This would certainly confirm /Film’s report about Disney having big plans and also confirms the Reddit post stating that they would be showing the film in front of every film over Thanksgiving weekend.

We’ll hopefully be seeing more than just these nine theaters follow suit. It would seem awfully strange to only show the trailer at these specific theaters.

Check back as we will update this post with more information as it’s announced.