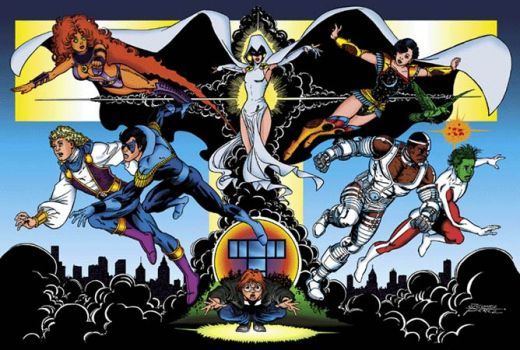 Last year TNT decided to forging ahead with plans for  a live-action Teen Titans series called Titans, which would center on the character of Nightwing.  Previously, Starfire & Raven were confirmed to also appear & now Nerdist is reporting they know what other characters will make up the team.

Reportedly, TNT is looking to cast the roles of Nightwing, Starfire, Raven, Hawk, Dove and…..Batgirl??? The last character comes as quite the surprise as Batgirl aka Barbra Gordon has never actually been a member of the Teen Titans.  Nerdist further reports that at the start of the series, Dick Grayson has not adopted the persona of Nightwing yet & has left Gotham and Batman to become  a police officer in Boston. Apparently circumstances force Dick Grayson to adopt a costumed vigillante persona once again but the former Boy Wonder decides to make the shift to Nightwing.

Furthermore, Barabra Gordon will not be fighting crime as Batgirl in this superhero drama, instead, she’ll be wheelchair bound and serve as the team’s computer hacker specialist.  That’s right, Barbara Gordon will be Oracle, not Batgirl on Titans.

Joining Oracle and Nightwing on the team are Hawk and Dove. However, this will be the Hank Hall/Dawn Granger version as the pair are described as being in a romantic relationship.  Starfire and Raven reportedly only appear at the very end of the pilot episode so there’s not a lot of details on how close their depiction will be to the comics. Noticabely absent from this version of the Teen Titans are two of the most popular members, Cyborg & Beastboy.  Also absent are original Teen Titan members Aqualad, Kid Flash and Donna Troy.  Of course, this doesn’t mean that these characters can’t or won’t show up later on at some point during the first season but they will not appear in the pilot episode.

What are your thoughts regarding the characters that TNT is planning on using in Titans? Does this one interest you?