A couple of weeks ago DeVon Franklin, Senior VP of Production at Columbia Pictures, teased a possible title card for Masters of the Universe and mentioned there would be some news coming soon.

Franklin was asked via Twitter yesterday what was happening with Masters of the Universe and he provided a little information about what was going on with the project:

@TheOneHansen will know more soon. New chairman at sony, gotta get in sync with the studio. As soon as I know I’ll report back

Another twitter user noted that if Guardians of the Galaxy could make over 700 Million dollars ($773,876,600 to be accurate) there’s no reason Masters of the Universe couldn’t do the same. This is when Franklin dropped our first look at a concept for Battle Cat.

It looks like a pretty straightforward adaptation of the original classic Battle Cat. I’m certainly excited to see how they might realize the rest of the He-Man Universe. What about you? Are you excited by a new He-Man film? What do you think of our first look at Battle Cat? 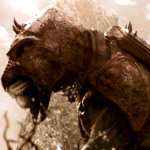