When I was getting back into comics, my friend and Indie Revolver EIC Jay guided me towards Frank Miller’s The Dark Knight Returns and Batman: Year One. Those were two of the greatest Batman stories I’ve ever read.

I own Year One as a hardcover, trade paperback and hunted down the single issues. I own the 10th Anniversary version of DKR as well as the original collection (with awesome Alan Moore introduction). Jay even managed to find me a sweet limited edition complete (at that time) leather-bound edition of all of Miller’s Batman work.

In essence, I’m a fan. I’ve even managed to get my youngest cousin into Miller’s work on the Caped Crusader.

And it’s because I’m such a fan that I was utterly let down by Frank Miller’s last two attempts at writing Batman. The Dark Knight Strikes Again and All-Star Batman and Robin were horrible. Not “so cheesy it’s good” bad, just plain bad. But he’s Frank f’n Miller…so he gets a pass for now.

So when DC announced that Miller would be returning to the Dark Knight universe to write a third chapter, titled The Dark Knight III: The Master Race, I was…unexcited. Even though Miller is teaming up with Brain Azzarello, one of the best crime comic writers in the last 20 years, I still find myself wondering if we really need another go around in this sandbox. 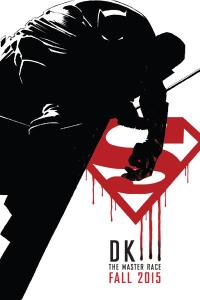 Everyone involved in the project certainly seems to think so. DC Co-Publishers Dan Didio and Jim Lee released the following statement:

“We are thrilled to have Frank back home at DC writing Batman. The story he and Brian have crafted is an astounding and triumphant conclusion to this seminal body of work which influenced and shaped generations of readers and creators alike.”

Meanwhile Miller said “Batman remains my favorite comic book hero, and a sequel to Dark Knight is going to be daunting, but we’ll do our best.” Azzarello chimed in with “It’s been an amazing experience collaborating with Frank these past six months. I think we have an epic story that these characters truly deserve.”

I’m still apprehensive. I’ll give the first issue a shot, but I’m keeping expectations low. I just don’t like how everything these days needs to be a trilogy. The Dark Knight Returns was perfect on its own. Dark Knight Strikes Again sullied that legacy. Let’s hope the third chapter is a return to the Frank Miller of old.