By now we’ve all gotten a look at the images of Lupita Nyong’o in her motion capture suit, thanks to Annie Leibovitz’s coverage for Vanity Fair magazine. 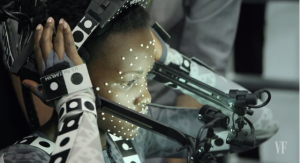 Until the Vanity Fair article’s release, every discussion of Nyong’o’s character to this point has referred to her as “Rose,” her leak-preventing code name for use on set and around the Episode VII production offices. We now know that “Rose” is actually a pirate by the name of Maz Kanata. Vanity Fair revealed the following image, shot by Leibovitz, captioned “Galactic travelers, smugglers, and other assorted riffraff fill the main hall of pirate Maz Kanata’s castle.”

While this is the first time we’ve heard the character’s true name, Lucasfilm released an official peek at the character in the second teaser trailer for The Force Awakens. Eagle-eyed viewers may have spotted the blink-and-you’ll-miss-it shot of the character handing Luke’s father’s lightsaber to Leia. See the profile of the face at the top right of the frame? That’s Maz Kanata.

We know that the Episode VII team went to great lengths to use puppets, prosthetics and practical effects whenever possible. While it’s difficult to get a great impression of the character’s look from the teaser, this production painting demonstrates that Maz Kanata would have been a very difficult makeup job:

Could this character have been a puppet? I’m sure they explored that direction for every creature. There must have been an expressive quality which Abrams and company felt couldn’t be achieved without going digital for an important character. I’ll admit some disappointment – it’s hard to forget how alive and intelligent Yoda felt on screen. Either way, it’s a bold decision to cast a fresh-faced actress coming off of winning an Academy Award win as a creature with no resemblance, but it seems J.J. Abrams is a bold fella.

Are you all in yet?