The hunt for the Ancient One in Marvel’s upcoming Doctor Strange may finally be at an end. After having such actors as KenWatanbe, Bill Night and Morgan Freeman rumored for the role, it would seem Marvel Studios has gone in a wholly different direction.

The Hollywood Reporter has good word that Tilda Swinton is in talks to play the Sorcerer Supreme that Benedict Cumberbatch’s Stephen Strange learns from and eventually takes over for.

Swinton is a bang-up choice. The woman is a chameleon, never looking the same way twice in any of her films or doing any roles the same. Just looking at two of her roles from last year – Snowpiercer and Grand Budapest Hotel – is proof of that.

Doctor Strange will star Benedict Cumberbatch as the titular hero. In the comics he was a cocky but talented surgeon until an accident cost him the use of his hands. Searching for a new meaning in life, Stephen Strange travels the world until he comes across the Ancient One, Earth’s Sorcerer Supreme. Learning the ways of magic, Strange soon takes on the role of Sorcerer Supreme and protects our realm from all the mystical threats that look to take over.

This won’t be Swinton’s first foray into the comic book world. She played the angel Gabriel in the adaptation of the Vertigo comic Hellblazer, the 2005 film Constantine.

Also on the Strange news front was a tweet from director Scott Derrickson. He posted the following image with the caption

AS WILL WE ALL: 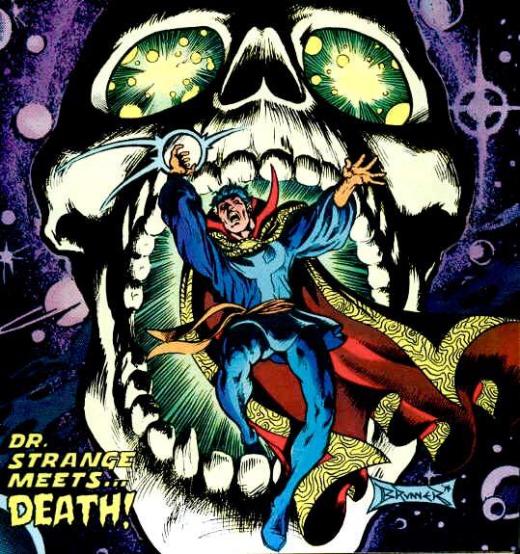 Could this mean we’ll see the physical manifestation of Death in the MCU? This could be the bridge Doctor Strange needs to tie it in with the rest of the Marvel Universe, as Thanos loves Death and would do anything for her, including gathering the Infinity gems which could possibly wipeout existence itself. Therein lies the tie-in with the Avengers: Infinity Wars films.

Whatever the case may be, Doctor Strange is shaping up to be one awesome film. Shooting starts this fall with the film slated to hit theaters November 4, 2016.