With the series debut quickly coming up, it was just a matter of time before we got to see the mask that the killer will be wearing in MTV’s new Scream series.

Entertainment Weekly managed to get the first look at the newly designed mask: 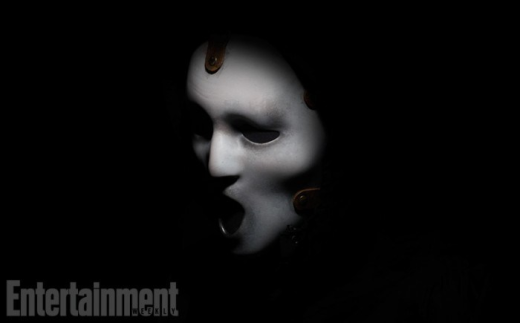 Executive Producer Jamie Paglia had the following to say about why they felt the need to go with a new mask:

The [original] mask is so iconic. If you were to have that mask in a television series, but you weren’t following any of the characters [from the original], I believe that would be misleading the audience.

Another EP, Jill Blotevogel, talked about how this mask fits into the lineage of classic horror masks:

It evokes some of the Jason hockey mask and the white Michael Myers mask, but it’s still first and foremost evocative of the Scream mask. It’s sort of a reinvention while also paying homage.

And then we have the director of the original film, horror master Wes Craven, weighing in on what he thinks of the new look:

The new mask is cool and scary and takes the series into a new direction. It also ties into the story, which I won’t give away.

The updated look is MTV’s way of going more “organic” and “grounded”, which to me are just buzz words that I believe is their way of covering up the fact that they’re being cheap and didn’t want to have to license the rights to the original mask. It’s completely disingenuous to say that they wanted to use a different mask because the original mask is so iconic and so closely related to the films that it would be “misleading to the audience”  YET THEY’RE MAKING A SERIES CALLED SCREAM. Using the original mask would be misleading but using the title isn’t? BULLSHIT. This mask is very disappointing, much like the show looks to be.

When Craven was shooting the original film, Dimension made him shoot scenes multiple times with other masks they developed because they didn’t want to pay to use the actual Ghostface mask. Thankfully Craven won the argument and they were able to use the authentic Ghostface mask.

I’ll still give the new show at least a few episodes to hook me. This is definitely on the lower end of the expectation scale for me.

Does anyone else think this new mask looks like something out of the street dance crew Jabawockeez?