Sebastian Stan, you are a cruel person.

We all know that the Winter Soldier will be in Captain America: Civil War. But I didn’t think that he’d be getting involved in the superhuman Civil War itself. I figured that he’d be on the periphery, keeping Captain America’s attention divided between him, the war and anyone else that ends up gunning for him.

Earlier today, Stan posted a picture of himself as Bucky to Instagram. Full beard, looking very ragged with a caption asking you to pick a side. But it looks like he’s already picked one, as the picture has a tag that says “Robert Downey, Jr.”: 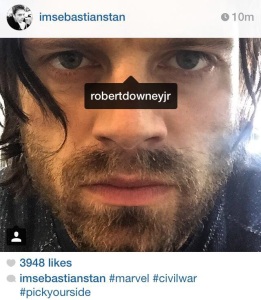 It’s probably safe to say that the film isn’t as closely connected to the comic book storyline as some would hope, as Bucky wasn’t even involved in the Civil War. When you think about it though, it couldn’t follow the comic storyline very closely as the MCU isn’t populated with a lot of superheroes with secret identities.

Perhaps Captain America loses the war, one way or another. Losing means he gets stripped of his identity as Captain America. Enter Tony Stark. Iron Man, coming out of the War the big hero, needs a symbol for the people to get behind. With Bucky so easily manipulated by years of HYDRA programming, Tony gets himself a new Captain America in the revamped Winter Soldier.

It could go a number of other ways. Maybe Sebastian Stan is just messing with us to get us all talking. We’ll find out for sure in just under a year, when the new movie hits theaters.