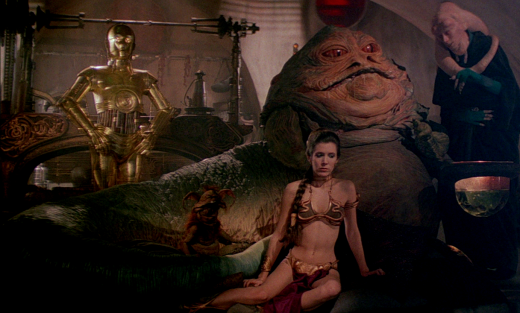 Guillermo del Toro works best when he has a wide array of strange and interesting looking characters to work with. Hellboy, Pan’s Labyrinth and Pacific Rim are all testament to this. But would GdT ever consider tackling the myriad of alien species that inhabit the Star Wars universe? Apparently yes, and he has an idea as to where he’d like to focus.

While at San Diego Comic-Con promoting his upcoming film Crimson Peak, del Toro was asked by a few different outlets just what he would do if he were allowed to play in the Star Wars sandbox.

First Yahoo asked the director if he’d ever do a SW film and he revealed that he has a pretty cool idea for an Anthology gangster film:

I would do the sort of Godfather saga the Jabba the Hutt had to go through to gain control. One, because it’s the character that looks the most like me, and I like him. I love the idea of a Hutt type of mafia, a very complex coup, you know? … I just love the character.

del Toro went on to stress that he hasn’t been approached for anything like this yet. It’s just a fan being geeked about one of his favorite properties doing cool things that he COULD be a part of some day if the stars align just right.

He then clarified this when talking to Fandango about the possibility of his working with Lucasfilm and Disney:

Well my dance card is a little full. I would love to, but I think there are a lot of things to get to first.

How well would a dark, gangster-style film go over at Disney? I don’t know, but if del Toro wants to take a crack at some weird looking characters and wacky aliens, the House of Mouse would be nuts not to jump all over him.