Most sequels tend to slow down as the number count in the title rises, coasting on name recognition and hoping that fans will buy a ticket just to see their favorite star rehash some half-assed plot and spout goofy catchphrases. Not so with Paramount’s latest installment in the Mission: Impossible franchise. The fifth film, subtitled Rogue Nation, has 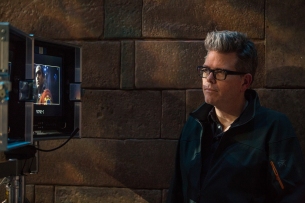 Ethan Hunt and his IMF crew once again fighting battles on two fronts while trying to save the world from people who would rather let it fall to chaos and ruin.

The action starts right out of the gate, with the IMF trying to stop the transport of a huge amount of nerve gas by terrorists. While Benji (Simon Pegg) and Luther (Ving Rhames) attempt to hack into the plane’s systems, Brandt (Jeremy Renner) keeps tabs on the almost-airborne toxins, letting his team (and the audience) know that the plane is soon going to be out of their reach. Enter Ethan Hunt (Tom Cruise), who hangs onto the plane as it takes off as a last resort, hoping to gain access in mid-air.

(As overplayed as it may be in the trailers and TV spots, it’s still something to watch as a human being is literally hanging outside of a plane going full speed and in the air!)

are now onto Hunt and know everything he knows. Kidnapped and transported to a makeshift dungeon, the prospects look bleak for the world’s greatest action spy. Help from an unknown ally (Syndicate baddie Ilsa Faust (Rebecca Ferguson)) soon leads Ethan to freedom, but sends him on the run from a criminal organization that probably wants him dead.

Meanwhile, half a world away, Brandt is fighting for the future of the IMF in front of a Senate oversight committee and CIA director Alan Hunley (Alec Baldwin). Unable to convince the committee of the need of the IMF, due to not being able to reveal operational information, the group is disbanded and absorbed into the CIA, with Ethan Hunt being branded a fugitive of the USA and now a wanted man.

With no country, no support and no friends to turn to, Ethan Hunt’s mission, should he choose to accept it, is to bring down the Syndicate by any means necessary while staying one step ahead of the United States government that

wishes to capture him and bring him in to answer for his reckless ways.

A lot of people are polarized by Tom Cruise, either loving or hating him. But make no mistake – this is a man who loves his craft and gives his all. How many other 53-year-olds would do the crazy stunts that Cruise does in this film? I cringe just thinking about looking over the ledge of a building that’s more than five-stories high. Forget about hanging on to the side of a plane as it takes off and flies me around for a bit! The big car / motorcycle chase scene is as good as anything that has come in the previous films in the series.

The returning crew of Renner, Rhames and Pegg are always welcome, adding a dash of drama and a well-timed one liner when the occasion calls for it. Newcomer Alec Baldwin is someone that I’d like to see stick around, as he’s one of those actors that can do comedy and drama so well, even mixing the two when the mood strikes.

I did enjoy Rebecca Ferguson, another in the long line of “M:I women” (kind of like “Bond girls”, but they kick a little

more ass) that the franchise has brought in. I’d say that I’d like to see her back as well, but with the way this film series picks up and drops its female co-stars, I won’t hold my breath.

Director Christopher McQuarrie, who also wrote the script and co-wrote the story with writer Drew Pearce, did a wonderful job of balancing the action pieces with the downbeats, letting the movie slow down and allow the audience to catch its collective breath before the next big stunt or fight. Cinematographer Robert Elswit (who also worked on Mission: Impossible – Ghost Protocol) made the most of all the exotic locations that were used for filming, from the back streets of London to the outskirts and cities of Morocco, giving us scene after beautiful scene to visually drool over.

With the amount of action films and franchise sequels that cluttered the box office this summer, Mission: Impossible 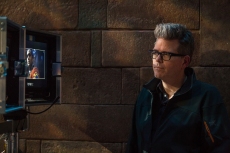 – Rogue Nation ranks right up there with Mad Max: Fury Road as one of the best “popcorn” films of the Blockbuster Season. If you choose to accept the mission and see this film, do yourself a favor and opt in for the larger screen

experience (Whether that happens to be IMAX or your local theater chain’s version, like Showcase Cinema’s XPlus Theater). The stunts alone make it worth the price of admission.