Entertainment Weekly has released the first look at the brand new poster for Quentin Tarantino’s Hateful Eight featuring Kurt Russell’s bounty hunter John Ruth and his prisoner Daisy Domergue played by Jennifer Jason Leigh. Ruth is tasked with bringing Domergue to justice at the end of a rope.

Russell and Leigh must seek refuge in Minnie’s Haberdashery along with six other strangers as a winter storm shuts down the pass. “The six others include Major Marquis Warren (Samuel L. Jackson), a black Civil War veteran; Chris Mannix (Walton Goggins), who claims to be the town’s new sheriff; Bob (Demian Bichir), Minnie’s manager while the owner is visiting her mother; Oswaldo Mobray (Tim Roth), the hangman of Red Rock; cattleman Joe Gage (Michael Madsen); and Confederate general Sanford Smithers (Bruce Dern).” 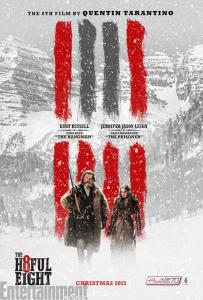 What do you think of the first character poster for Tarantino’s next? Let us know in the comments!