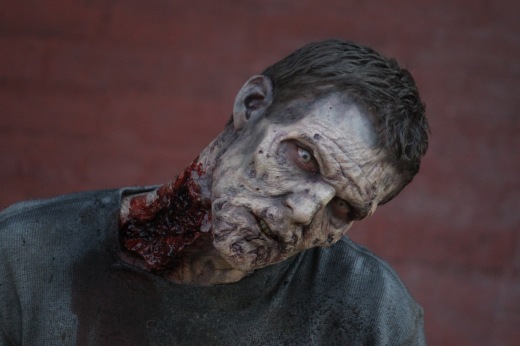 As zombie films and shows have made abundantly clear, being in an enclosed space with walking corpses is never an ideal situation. Most times it happens in a factory or an apartment and escape is possible. A few films, like World War Z and Flight of the Living Dead, showed us what could happen if that enclosed space happens to be cruising a few thousand feet above terra firma.

Now AMC and The Walking Dead want to put their own twist on the “zombies on a plane” story with their newest planned special.

The event is being categorized as a few different things. EW says that it’s a half-hour special, but that it will air online as special webisodes. This isn’t the first time the series will be experimenting with web-based content, but it is doing something new with their presentation of them. Those webisodes will then air during commercial breaks for the sixth season of The Walking Dead.

It’s not known just how many chapters this will be broken up into or exactly how it will air (online first, then TV or vice versa). What is known is that one surviving character from the incident will join the second season of AMC’s newest hit Fear the Walking Dead.

This is genius marketing on AMC’s behalf. By telling fans they plan on airing the chapter during commercials, but not at what time, they can now charge premium rates for ads. The Walking Dead is already a ratings juggernaut, but knowing that viewers will now sit through almost every commercial break to watch the next chapter in an ongoing mini-story, the network could now possibly demand top dollar for commercial time. Nothing in the range of the SuperBowl, but they could stand to make a decent profit off of this.

No character breakdowns or plot points were revealed, but since Fear the Walking Dead takes place in Los Angeles, odds are good this plane is from somewhere east of the City of Angels. This could mean we could get someone with a little East Coast or Midwest flair to diversify the cast a bit. A character who doesn’t know their way around the landscape will add an extra bit of danger to the proceedings. This person will most likely need to be watched over like a newborn until they get the lay of the land.

Fear the Walking Dead airs Sundays at 9pm on AMC now, and the sixth season of The Walking Dead premieres on Sunday, October 11 at 9pm with a special 90-minute episode.