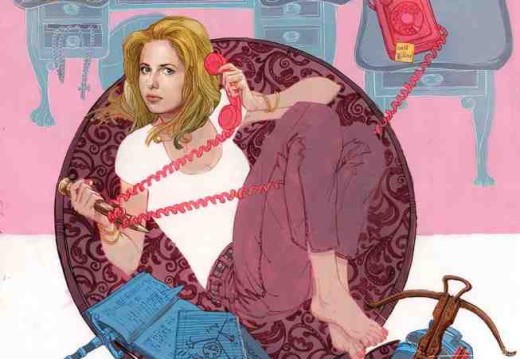 What once was old is new again and that adage proves true for Dark Horse Comic’s newest series.

Announced at the DHC panel at New York Comic Con, the newest comic in the popular franchise based on Joss Whedon’s creation will be Buffy The Vampire Slayer: The High School Years.

Set up as a “between-the-episodes” type series, the comic will take us back to season one, when Buffy Summers first arrived at Sunnydale High School and started kicking vampire ass. Eisner-award winning writer Faith Erin Hicks will chronicle the adventures while Yishan Li will handle the art chores.

In an interview with Newsarama, Hicks talked about the timeline of the series, saying that the first issue takes place before the “Angel” episode in season one. So we’ll have Buffy in the early stages of her relationships with Xander, Willow and surrogate father figure Giles.

The first arc follows a group of vampires that aren’t quite as cool as the other bloodsuckers running around town. To try and up their popularity the “nerd-vamps” are going to try and take down the Slayer before she starts staking everything without a pulse.

It takes some of the edge out of things as we already know nothing too horrible can happen to the characters without disrupting continuity. But I’m a sucker for stories that take place off-screen so the odds are good I’ll at least try the first arc out to see how it goes.

The first issue of Buffy the Vampire Slayer: The High School Years is set to debut on June 15, 2016 in comic stores nationwide.