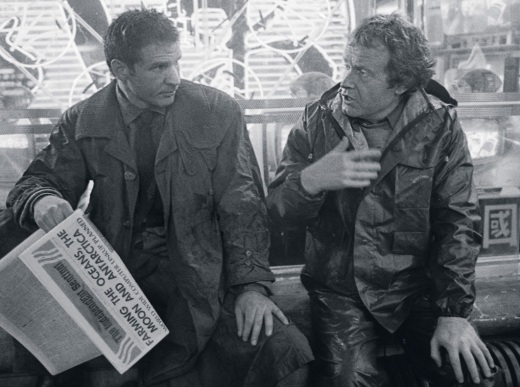 I’ve made my displeasure over the idea of Blade Runner 2 very well known. The first film is sacred ground for me and I think there’s far more to lose with a sequel than there is to gain.

I will admit that Ridley Scott’s enthusiasm along with the return of Harrison Ford and the hiring of Sicario director Denis Villeneuve have my interest VERY piqued.

Recently, Ridley Scott spoke during AFI Festival and shared what he had in mind for the opening of Blade Runner 2, which is actually the unused opening from the original Blade Runner. (Mtime was there and /film provided an English translation):

We decided to start the film off with the original starting block of the original film. We always loved the idea of a dystopian universe, and we start off at what I describe as a ‘factory farm’ – what would be a flat land with farming. Wyoming. Flat, not rolling – you can see for 20 miles. No fences, just plowed, dry dirt. Turn around and you see a massive tree, just dead, but the tree is being supported and kept alive by wires that are holding the tree up. It’s a bit like Grapes of Wrath, there’s dust, and the tree is still standing. By that tree is a traditional, Grapes of Wrath-type white cottage with a porch. Behind it at a distance of two miles, in the twilight, is this massive combine harvester that’s fertilizing this ground. You’ve got 16 Klieg lights on the front, and this combine is four times the size of this cottage. And now a spinner [a flying car] comes flying in, creating dust. Of course, traditionally chased by a dog that barks, the doors open, a guy gets out and there you’ve got Rick Deckard. He walks in the cottage, opens the door, sits down, smells stew, sits down and waits for the guy to pull up to the house to arrive. The guy’s seen him, so the guy pulls the combine behind the cottage and it towers three stories above it, and the man climbs down from a ladder – a big man. He steps onto the balcony and he goes to Harrison’s side. The cottage actually [creaks]; this guy’s got to be 350 pounds. I’m not going to say anything else – you’ll have to go see the movie.

…Or you can look below!

Since a picture is worth a thousand words, I’ve included Sherman Lobby’s original storyboards for this exact scene made for Scott’s original film below which illustrate exactly how the scene plays out. 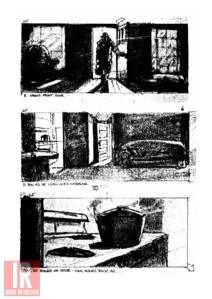 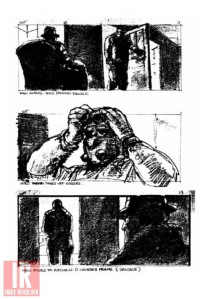 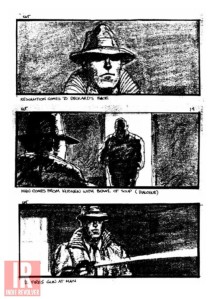 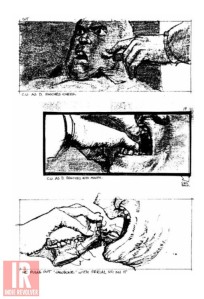 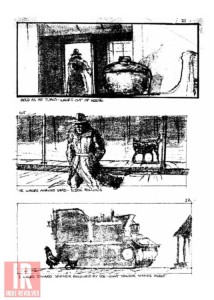 I’ve always loved this scene, but I can see why it was abandoned as it really didn’t fit in with the rest of Scott’s dark, claustrophobic cityscape.

What do you think? Are you interested in a Blade Runner sequel starring Ryan Gosling? Do you think this scene will play with an aging Ford as Rick Deckard? Leave a comment below!

One thought on “Feast Your Eyes on Ridley Scott’s Opening Scene to ‘Blade Runner 2’!”