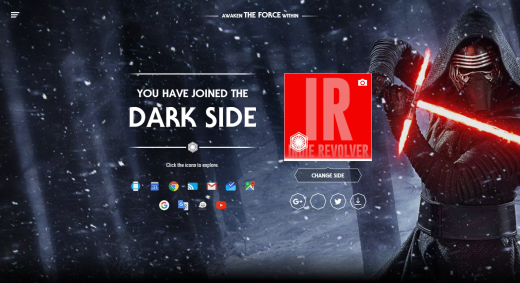 Today you can officially choose a side. Disney and Google have joined forces to give fans some new Star Wars: The Force Awakens interactive experiences.

I’m still tinkering around with it, but basically you can choose the light side or dark side and based on that choice you can choose to tailor some of your Google apps. I just updated my Gmail with a dark side skin and I’ll be exploring this further when I get a little downtime later on.

Verizon Brings Fans into the World of STAR WARS: THE FORCE AWAKENS through the Google Cardboard Virtual Reality Experience

BURBANK, CALIF. (November 23, 2015)—Disney announced today that in an unprecedented collaboration with Google, Star Wars fans will have an opportunity to share in immersive experiences—Awaken the Force Within and Google Cardboard Virtual Reality—in celebration of Lucasfilm’s Star Wars: The Force Awakens.

Awaken the Force Within global program starts today and fans logging onto google.com/starwars can make a choice to be on the Dark Side or the Light Side for the upcoming Star Wars: The Force Awakens. Their favorite Google apps will transform to reflect the path they choose. Special experiences have been developed for Android Wear Watches, Google Calendar, Chrome, Chromecast, Gmail, Google Maps, Google Now, Waze and YouTube with added features for fans to discover on their Inbox by Gmail, Google Translate and Google Search.

Coming on December 2 is a new virtual reality experience developed along with Google and Verizon. This will feature the first-of-its-kind serialized Google Cardboard Virtual Reality (VR) experience that combines a compelling story and exclusive, never-seen-before content, which ties directly into the opening of Star Wars: The Force Awakens, with the very latest cutting-edge Virtual Reality technology.

The Google Cardboard Virtual Reality experience launches via the official Star Wars app and is available on both Android and iOS devices.

Lucasfilm and visionary director J.J. Abrams join forces to take you back again to a galaxy far, far away as Star Wars returns to the big screen with Star Wars: The Force Awakens.