Star Wars fans in China can breathe a little easier – Disney and Lucasfilm have procured a theatrical release date for the highly anticipated next installment, The Force Awakens.

Disney announced that January 9th 2016 will see the release of the seventh episode in the saga in 2D, 3D and IMAX 3D in China.

And to further entice audiences, the Chinese audiences even get their own special edition of the poster that was released. It’s the same basic design but with some tweaks here and there: 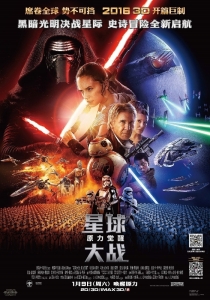 The Chinese government is very selective about how many non-Chinese films get released in their country, instead looking to focus on local filmmaking. Even though The Force Awakens opens everywhere else in just a few weeks, Disney did not get their bid in on time for a 2015 release date in one of the biggest worldwide markets going today.