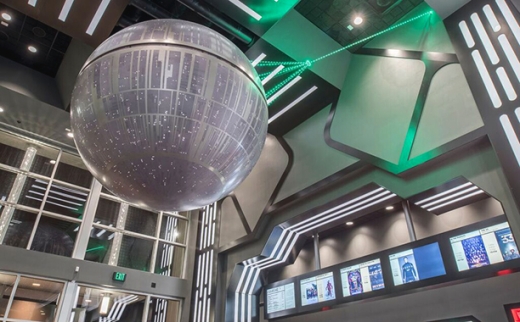 If fans of Star Wars want to feel the Force they may need to save up and take a trip to the Midwest.

Alamo Drafthouse, proprietors of a classy chain of theaters that are very strict with the “No Talking / No Cell Phones” rule, have decided to open a Star Wars themed theater in Omaha, Nebraska.

The team in Omaha have been working hard to create one of the best looking lobbies in theater history. There’s a 10-foot Death Star, a concession stand that looks like it belongs in space and the Emperor’s Throne that actually turns on the Death Star hanging in the lobby.

In a statement to Entertainment Weekly, the Alamo team had the following to say:

The idea behind the lobby is that we wanted to construct and install a lobby theme that would make us unique in our Omaha market as well as the midwest. We also wanted a theme that was built around an iconic film and to completely own that theme to immerse our guests in the experience. That is when Star Wars came into the picture and it just so happened that we timed it out just right with the announcement of the huge plans for a new Star Wars legacy starting this December. It is a permanent installation and will be the destination to see all of the new Star Wars films.