After Star Wars: The Force Awakens, the next big film I’m looking forward to is Deadpool. We all know that Ryan Reynolds is a huge fan of the character and wants to erase the bastardized version (that he also unfortunately brought to life) from X-Men Origins: Wolverine from the collective memory of the entire world.

The red-band trailer that debuted a few months back and the leaked San Diego Comic-Con footage put all my fears to rest about whether or not director Tim Miller would “get it.” And all the viral videos from Reynolds let the fans know that he wants to give us all the fourth-wall breaking Merc With A Mouth from the comics that we all love.

But it gets better. Apparently we’re in the 12 Days Of Deadpool right now, which is FOX’s way of giving the fans the best Christmas ever. For the next 12 days we’ll get something different from the film, culminating in a new trailer on December 25th.

Our first “gift” is courtesy of Entertainment Weekly and it’s a new one sheet poster that most definitely pushes the boundaries of the R-rating with the phallic symbolism: 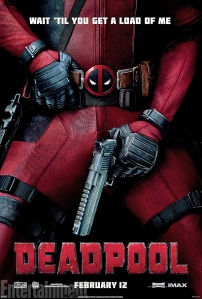 I don’t know how many theaters we’ll see this hanging in, but I’m loving the gutsiness of the studio to even think about putting this out there.