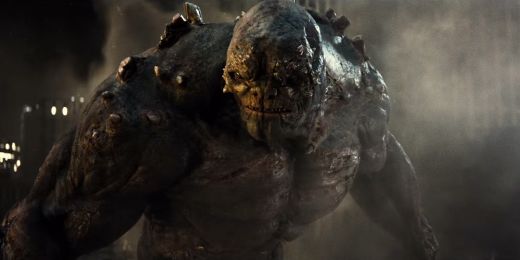 Batman V Superman: Dawn Of Justice is a little more than two months away, but already Warner Bros is looking to the future and their shared onscreen universe. Director Zack Snyder is saying that the future of Batman, Superman, Wonder Woman and friends – collectively known as the Justice League – may start with the present and the battle with Doomsday that takes place in BVS.

Speaking to The Daily Beast, Snyder offered some insight as to just what Doomsday may mean to the DC Cinematic Universe:

Maybe there’s a bigger enemy to fight…Well, you have Doomsday, right? He doesn’t just crawl out of the ground. He has his own mythology, right? So that has to be explored…

Comic book fans know that Doomsday has had a few different origins over the years. Whether it was his four color debut, his New 52 beginnings or his many incarnations in animation or on the small screen in Smallville, the Superman foe has quite the history to pour over.

But what if Snyder means his movie mythology? We can glean that maybe Lex Luthor has his hand in creating the tough-to-kill baddie while viewing the trailer. But what if someone is pulling the strings? What if someone is testing the Justice League bit by bit to see if they are “worthy”? What if this someone had something apocalyptic on their mind?

This could lead to WB debuting Darkseid, the DC version of Thanos, to challenge the League. Snyder did say that we’d see our heroes going up against a new caliber of villain over the course of the films in the shared universe.

I’m hoping I’m wrong though. If Warner Bros goes that route it would just be seen as them being a clone of Marvel Studios, with no new ideas of their own. Sure the logical thing to do would be to build up to a huge villain like the New God of Apokolips, but this is a chance to do something new and exciting.

We’ll see the start of it all when Dawn of Justice swoops into theaters March 25.