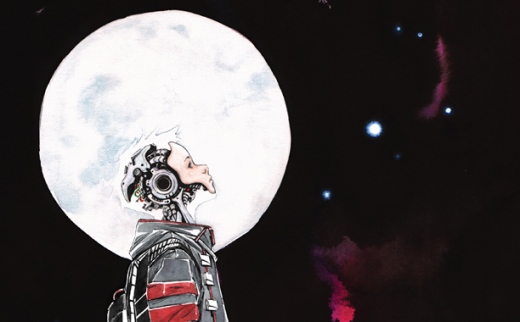 Even before the first issue hit the stands, Sony snatched up the rights to the new Image Comics project Descender. The book, from writer Jeff Lemire and artist Dustin Nguyen, is set in a time where anything robotic is hunted and scrapped. But one android, TIM-21, may hold answers to stopping universe-wide destruction. Now, along with a rag-tag group of renegade robots, TIM-21 is constantly on the move in a galaxy that wants to capture him for one reason or another.

The Hollywood Reporter dropped the news that Sony has found a writer for their adaptation and that man is…Jesse Wigutow.

Wait, who? Wigutow has mainly done a couple of shorts and a made-for-TV movie. He’s been involved in the writing of the Tron: Legacy sequel and the early drafts of ill-fated Crow reboot. He’s also been working on a film adaptation of the Brian Michael Bendis graphic novel Fire. Descender may be Wigutow’s first major work to hit the big screen.

I’ve been reading the comic since the first issue and it’s a really good story. I just don’t know how I feel about it being a major motion picture. Even if it gets the trilogy treatment this is a tale that I’m thinking is best left to unfold over a long period of time. I would rather have seen it get the episodic treatment of TV or a streaming entertainment provider.

But if Wigutow can find a way to make it work, more power to him. Right now Sony has no immediate plans for filming or release but that could change depending on how much they like what Wigutow provides them.