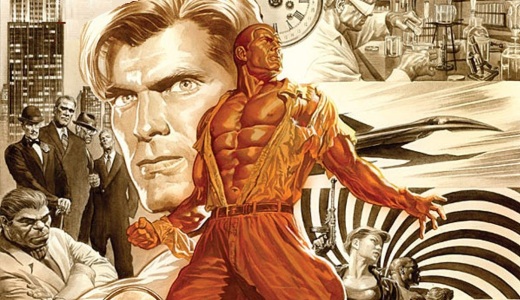 Director / screenwriter Shane Black is amassing quite the impressive resume. With writing credits for classics like Montster Squad, Lethal Weapon and Predator as well as directing films like Kiss Kiss Bang Bang and Iron Man 3, Black seems like he would have his choice of projects. But there is one that has been on his mind for some time now and he shows no signs of forgetting it.

While talking to Thrillist about his upcoming film The Nice Guys, the filmmaker talked about his pet project, Doc Savage, and just who he’d like to see as the titular character:

Doc Savage is sort of in the ether now. We’re hoping to make it sometime next year. I would very much like to do Doc with a fellow named Dwayne Johnson if we can make that work. I made a decision that Dwayne is the guy. It’s on the back burner while he’s busy.

For those who don’t know, Doc Savage is a pulp adventure hero from the 30’s. A scientist, explorer, inventor and all around ass-kicker, Clark “Doc” Savage, Jr. is a relic from another era that could still feel timeless in today’s world if the update of the character is done right.

Black wrote a screenplay back in 2009 and has been attached to direct since 2010, with nothing happening since then. Chris Hemsworth was rumored to be up for the role of “The Man Of Bronze” at one point but Shane Black seems to have his eyes set on the Rock.

It’s doubtful that Johnson’s schedule will clear up by next year but he can always hope. Until then Black will be keeping busy with the upcoming reboot / sequel The Predator.