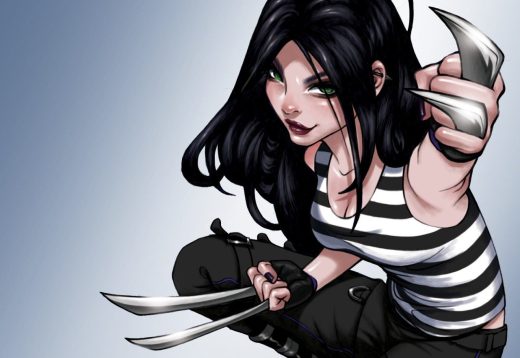 Even though it was rumored that FOX was looking to Channing Tatum and Gambit to be the go-to character once Hugh Jackman hangs up the claws it would seem that the next (and possibly last) Wolverine film might pass the torch to another popular mutant.

SuperHeroHype dropped the news that FOX is looking to debut the Wolverine-esque X-23 in the third solo film of the Canadian mutant, which is rumored to be a loose retelling of the fan favorite Old Man Logan storyline from writer Mark Millar and artist Steve McNiven.

For those not in the know, X-23 is a character in the comics named Laura Kinney. She is the result of the Weapon Plus Program trying to clone their greatest experiment ever – Wolverine. She has accelerated healing and claws to pop. Kinney was raised in captivity to be the ultimate killing machine but she eventually escaped to try and become her own person (like all great tortured comic heroes).

This would make sense. You’d essentially be replacing Wolverine with a younger female version of himself so you’re not asking the fans to latch onto a brand new character – just a different version of the one we’ve come to love already. And seeing as she has Wolverine’s healing factor it could be assumed that she ages slowly too, meaning even though this film takes place in the future they could still use her in the current timeline of films without needing to explain why she always looks to be in her mid-20s.

While this would be very cool news it should be noted that no one from FOX has confirmed that X-23 will be in the film itself, so we’re going to file this one under RUMOR until someone sees a young chick walking around with Hugh Jackman and Patrick Stewart sporting a set of claws on each hand.

Director James Mangold will be returning to helm this installment after impressing with the last solo film, simply titled The Wolverine.