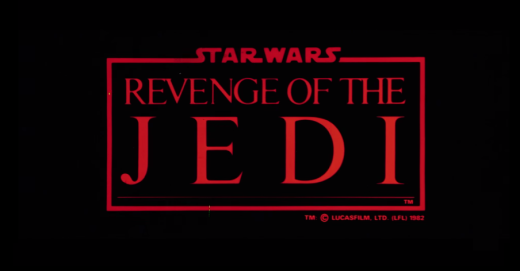 Fans all know the story, originally the final chapter of the Star Wars trilogy went by the title Revenge of the Jedi until George Lucas decided that revenge would not be the way of a Jedi. His decision was late in the game, as crew gear, posters, trailers and merchandise bearing the more aggressive title were produced and in some cases sent out before being recalled for the more Jedi-appropriate title.

The Academy has unearthed what might be the first example of a trailer bearing the original Revenge title, unseen publicly since UK audiences laid eyes on it in May of 1982 attached to a double feature of A New Hope and The Empire Strikes Back. Perhaps stranger than the original title is the advertised UK release date of Christmas 1983, the film was ultimately released in the UK on June 2, 1983. American audiences wouldn’t get their peek of Revenge of the Jedi until August of that year.

The trailer itself is frankly not very impressive, It’s very short and only provides some quick glimpses of the characters via still images. But make no mistake, there’s no question that this is an important piece of film history.

Since we’re strolling down memory lane, check out these other Revenge of the Jedi trailers below if you haven’t given them a look:

Watch the original teaser trailer for Revenge of the Jedi, which appeared in theaters before Star Wars creator George Lucas changed the name of the film to Return of the Jedi. This trailer features the completed Revenge of the Jedi logo, shows Luke wielding a blue lightsaber (in the final film, his Jedi weapon would have a green blade), and features a quick shot of Obi-Wan Kenobi before “spirit” effects were added.