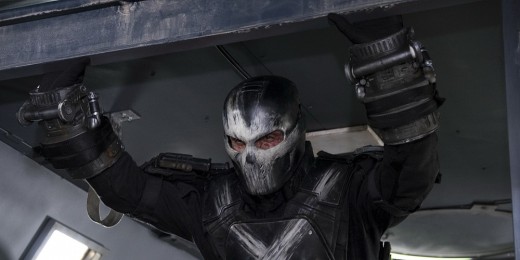 Frank Grillo is one of the most badass and underutilized action stars today. He was the best parts of the last two Purge films and was all kinds of cool as Brock Rumlow in Captain America: The Winter Soldier (for the limited amount of screen time he got).

So I was all kinds of excited to hear that he’d be making an appearance as Rumlow’s alter ego Crossbones in Captain America: Civil War. But as many who have seen the film know, Crossbones doesn’t hang around for too long. (SPOILERS of a sort are ahead)…

Still reading? Cool. So we all saw Crossbones fighting Cap in a major one-on-one street fight that actually had you fearing for the Star Spangled Avenger’s fate. But just as Rumlow was going to kaboom himself like a Fourth of July fireworks display the Scarlet Witch encased him in an energy bubble and let him blow himself into paste.

Speaking with ABC News, Grillo teased that maybe the Marvel Cinematic Universe isn’t quite done with him yet.

“You think he dies, don’t you?” Grillo said, smiling, before adding, “Did you see the body?”

So Frank Grillo is under the impression that Crossbones can survive being a human M80? He did live through having a building dropped on him so maybe he’s a bit more resilient than we give him credit for.

It would be nice if Crossbones wasn’t another MCU villain that died just as he was getting interesting. The next best place we would see him that would make sense would be Black Panther, as King T’Challa would definitely go after the man responsible for bringing the explosives that killed nearly a dozen of his fellow countrymen.
We’ll just have to wait and see for now. Maybe Frank Grillo was just having fun…but he could also be letting on to more than the execs at Marvel Studios would like him to.