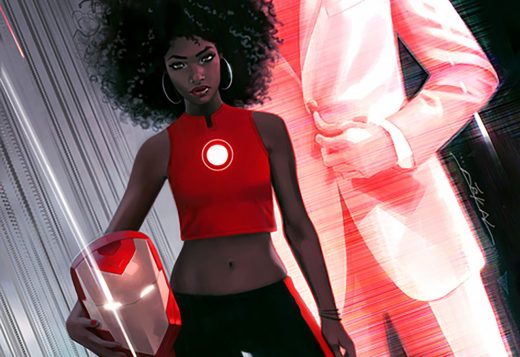 Tony Stark is Iron Man. Marvel Comics has tried to replace him with future relatives (Arno Stark), friends (James “Rhodey” Rhodes, who would later become War Machine) and female co-workers (Pepper Potts) and in the end Tony always puts the suit back on and goes to work.

But that doesn’t mean the man can’t take a break every now and again. And the seeds were planted back in the relaunched Iron Man #7 when a young black female college student was shown creating her own suit in her dorm room.

And now that student, known to the Marvel Universe as Riri Williams, will have a chance to put her money where her mouth is when Marvel relaunches Iron Man this fall and puts her in the driver’s seat.

After the events of Civil War II (which sees Iron Man and Captain Marvel clashing over the use of psychic precognition to help prevent criminals from actually doing bad things), Stark might need a break, so he hands the reigns and name (yes, she will go by Iron Man) over to Williams.

While speaking to Time Magazine, writer Brian Michael Bendis expanded upon why now was the time to change up the character and shake up the status quo:

One of the things that stuck with me when I was working in Chicago a couple of years ago on a TV show that didn’t end up airing was the amount of chaos and violence. And this story of this brilliant, young woman whose life was marred by tragedy that could have easily ended her life—just random street violence—and went off to college was very inspiring to me. I thought that was the most modern version of a superhero or superheroine story I had ever heard. And I sat with it for awhile until I had the right character and the right place.

Talking to any of the older creators, it’s the thing they said they wish they’d done more of—reflecting the world around them. It just wasn’t where the world was at at that time. Now, when you have a young woman come up to you at a signing and say how happy she is to be represented in his universe, you know you’re moving in the right direction.

Bendis is Marvel’s go-to guy for the bigger things. While he hasn’t always hit it out of the park and some of his work has been highly criticized (i.e. heavily “writing for the trade” and really stretching stories out), he has helped introduce a more diverse universe, with characters like Jessica Jones (now a Netflix favorite) and Mile Morales (the young man who took over for the deceased Peter Parker in the Ultimate Universe) as well as write some of Marvel’s larger event series of the last decade.

Some fans may get riled up by this, but in a universe that has a black Captain America, a Muslim Ms. Marvel, a female Thor and several other characters that represent the wide and diverse world we live in I say this should make for an interesting story. And it’s comic books, folks…it’s not like they can’t just change it back in a few months if it doesn’t sell enough copies.