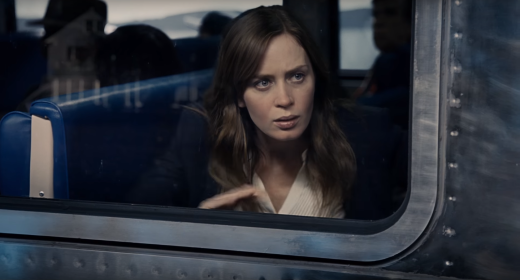 Emily Blunt shows us just how much love can hurt, a seemingly dangerous alcoholic set in a story of lies and deceit.

Based on the novel by Paula Hawkins, The Girl on the Train is a psychological thriller that’ll lead you off in different directions. Just when you think you know a character, or the answer to a character’s decision making, you’ll soon find yourself looking a different way, wondering whether you’ve missed something key to solving this mystery.

Emily Blunt (Looper, Sicario) plays damaged alcoholic and former suburban wife, Rachel Watson. Rachel has fallen off the tracks (pun intended) and cheap vodka has become her answer. When we meet Rachel she is travelling by train into central New York for work, this is a pattern that repeats itself over and over as she lives a life of routine, something most of us are all too familiar with. Armed with her Schweppes and a notebook containing gothic art, she passes the beautiful suburban area of Hudson Valley, a place where the dream of a suburban lifestyle, a family and Autumn leaves sprinkled on the grass becomes reality. Each day Rachel looks out the train window, seeing a young blonde woman standing on her porch, looking out of what appears to be her dream home. It’s here that you start to wonder, where you, like Rachel, become obsessed with knowing more about the life of this unknown lady.

The blonde woman is Megan Hipwell (Haley Bennett), she’s the one Rachel is infatuated with, making up stories and playing them out in her mind. It’s at this point we’re led to believe Rachel is just some sad loner, living a less than satisfactory life, looking in on the life she could – or in her head, should have had. We’ve all been there, looking out the window of a train, wondering what it’d be like to be that person in the beautiful house, Rachel is no different, we soon learn that Rachel had once almost had “that life”, living two doors down from the stranger who’s now so important to giving her life purpose. As the story progresses, we find out through flashbacks that Rachel was unable to have a baby, it was this that ultimately lead her to drink. Unable to fulfill her dream, she started down a path that brings her to the point where we meet her.

With the narration by Blunt, director Tate Taylor (The Help) sows the seeds from the beginning, without giving anything away, Taylor puts the audience in an ambiguous place where we are left to follow and determine what is really happening. As we’re thrust from Rachel’s life and into that of Megan’s, we begin to realise that this seemingly perfect suburban lifestyle may not be all it appears to be. We learn (again through narration, this time from Megan’s perspective) that she is troubled, unhappy and downright sad. Again, what it is that’s causing or has caused her to feel this way is left unanswered, for now. Megan’s therapy sessions help to unravel some of the mystery revolving her character.

Everything changes when Rachel sees Megan kissing a stranger on her balcony, she snaps, feeling a deep anger and resentment towards her, she vows to tell Megan that she is throwing it all away! That night Rachel gets intoxicated (as per usual), though this time on a level where you tend to do things you don’t remember, or end up regretting. After an outburst in a bar bathroom where Blunt gives a deeply passionate outcry, screaming at the mirror she’d just smothered with blood-red lipstick, a foresight for what’s to come. She stumbles off, making an unusual stop at Hudson Valley train station, she unknowingly scrambles into a situation that will change all of our character’s lives, forever. What ensues is a blurry, drunken scene, in which Rachel ends up blacking out (a common occurrence, with ramifications later). The next morning, Rachel wakes up, covered in blood, broken phone and vomit on the floor, after saying she was going to kill Megan, and the drunken visionaries, it doesn’t look good for our title character. Living in her friend’s spare bedroom, it is here that we find out Rachel doesn’t even have her once successful PR job, and that she travels the train everyday just to see Megan, that life she so desperately clings onto, sad, but not in the embarrassing sense, this is her life, it’s real to her and you’ll greatly feel for her from this point forward.

We now learn that troubled Megan is missing, with Rachel the one last seen in the area, and her motivations voiced after seeing her with the stranger on the porch. Tate Taylor and screenwriter Erin Cressida Wilson (Secretary) leave it in our hands to put the puzzle together, they make you work but not too hard, guided by flashbacks and strange-sexual counseling sessions with Megan and her shrink, Dr. Abdic (Edgar Ramirez), you really start to wonder, who really are these people, what do they want, why are they acting this way? A great script and strong direction can make a movie great, but the performances given by our cast is what immerses us, Blunt giving one of her best performances to date. She’s a mess, Danish cinematographer, Charlotte Bruus Christensen (The Hunt) adds a sense of the effect of alcoholism to Emily Blunt early on, her makeup and face almost morphing like a painting that hasn’t dried,  the look of an alcoholic, one who is literally falling apart.

When Megan’s disappearance becomes national news, all eyes are on Rachel, though it’s her strangely calm ex-husband Tom (Justin Theroux), and controlling new wife Anna (Rebecca Ferguson) who raise question marks, huge question marks! With flashbacks showing us a Rachel appearing to attempt the kidnap her ex’s new born, we think, “could she be more dangerous”? – another fantastic piece of misdirection that continues to lead you off course, it’s now I’d recommend more focus on the flashbacks to Tom’s office parties and the aftermath of that, along with his reaction to learning Megan has actually left her job as his and Anna’s babysitter, yes it’s confusing. A story that starts off with everyone living separate lives, moves forward to reveal that they are all connected, again, another brilliant reveal. Why does Tom seem subtly shocked by Megan leaving her job, probably because he’s sleeping with, I saw it coming!

As Rachel finds purpose in Megan’s husband, Scott Hipwell (Luke Evans), and the search for not only Megan but her own memory after the blackout, we start to see a new Rachel, one who may not be as crazy as we were originally lead to believe. After the realisation that Dr. Abdic was the stranger on the balcony earlier, Rachel and Scott set out to expose him, and in doing so put themselves in the frame leading to more accusations that one of them was actually responsible. These numerous back and forths never feel forced or unnecessary, in fact they are the complete opposite. You’re left in the midst of the psychological mess, where you’re just not sure who to trust, even as it becomes more apparent that this wasn’t the harmless drunk, Rachel, you still have your guard up, ready for the worst. It’s not until Rachel approaches Tom’s ex boss Martha (Lisa Kudrow), that the coffin finally gets nailed down. When Martha reveals to Rachel that she didn’t do the things Tom said she did, the betrayal and deceit hits home for us as much as Rachel. All of this finally unravels the truth, that the disappearance and eventual murder (another thing I didn’t see coming) of Megan, the truth about Rachel’s spiral into the alcoholic she’s become, and pretty much everything else terrible that has happened to our character’s comes down to Tom. A control freak of the worst kind, Justin Theroux gives a strong performance, to the point that you will cringe at his abusive actions,very convincing and traumatically real. Every character in this film has a story, our three female leads, Anna, Megan and Rachel are all victims of Tom, this man who came across as calm and understanding is finally revealed as the awful human he is, and meets his despicable yet justified end at the hands of his ex Rachel and current wife, Anna.

The Girl on the Train is being written about as if it were the poor love child of Gone Girl, when in truth, it’s not only a completely different film that isn’t about a psycho wife framing her husband. No, The Girl on the Train is a film that tells the realistic tale of three women, abused, controlled and broken by a man who ultimately has the biggest psychological problem out of all our character’s. This flick felt very real for me, and should for anyone who watches it. The tale of a pig headed man, who can’t keep it in his pants, living a “perfect life” whilst leaving a path of destruction behind him, the absolute realness of this film is what ultimately pays off.

With incredibly powerful performances, especially from Emily Blunt and Haley Bennett, twists and turns that’ll keep you engrossed and an incredible job done by Tate Taylor to immerse us in this tragedy yet leave us with hope for a better tomorrow. The Girl on the Train is a psychological thriller through and through, and will leave you satisfied with the journey and outcome.
RATING: 8/10