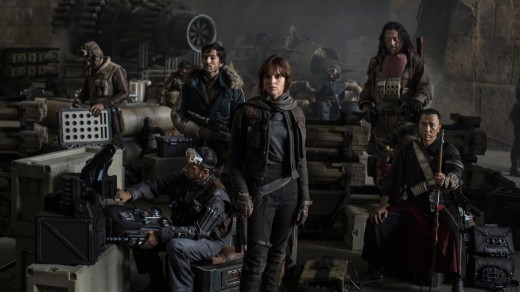 They didn’t lie. Rogue One was certainly a Star Wars Story and a pretty damn good one at that. Equal parts thrilling, dark and hopeful.

The concept is brilliant, focusing an entire film on the theft of the plans to the Death Star which served as the impetus of A New Hope, the very first Star Wars film. It’s such an important detail, but one that most probably never gave a second thought to. Credit to John Knoll for spotting that seed and Gary Whitta for developing a story and creating a whole crew of characters that are new but feel quite right in the Star Wars universe.

First off, fans can breathe a sigh of relief.  The widely reported reshoots do not impact the viewing experience. Rogue One is not a damaged, incoherent film in any way. Is it a perfect film? No. But that doesn’t mean that anything is broken. My complaints after one viewing are all fairly small.

From the get-go we know that this is not our typical Star Wars film. Sure, it begins with the usual “A long time ago in a galaxy far, far away….” but missing is the subsequent text crawl that we’ve grown accustomed to seeing in every other Star Wars film previously. This was an inspired decision, one that subconsciously disorients the viewer and puts them in a position they’ve never been in with a Star Wars film before. We have zero idea of where we’re being dropped in the Star Wars universe. We’re not entering with the big picture having just been spoon fed to us. Anything is possible. This is followed by a VERY Star Wars moment, a ship in outer space. But this familiar opening is subverted since we find ourselves in a flashback, a first in Star Wars cinematic history (Rey’s force vision in The Force Awakens is not a flashback). It’s like they’re kinda, sorta playing by the rules, but not. Until I was sitting there watching it unfold, I hadn’t realized how much I’d gotten used to the way a Star Wars film is presented. It was exciting to be in that universe and have things be just a little bit different and not knowing what to expect.

The plot of Rogue One focuses on Jyn Erso, played by Felicity Jones. Jyn is tough as nails as a result of what she’s seen and how she was raised. She is stoic, even when over her head but there’s a vulnerability that Jones brings to the character that adds an important dimension. But make no mistake, as much as the film hinges on Jyn’s story, this film is an ensemble piece and they’ve assembled a very deep bench of talented and diverse actors and actresses unseen thus far in any Star Wars film, which is great news. There is representation for nearly everyone in the film and it never feels gimmicky or forced.

Most intriguing among them is Diego Luna’s Cassian Andor.  Andor is man of mystery, a character who operates in the gray area, doing bad things for a good cause. He is a means to an end and a character we haven’t seen the likes of before in any Star Wars film, a dark character in a world without much hope. Andor is another example of the way that Rogue One separates itself apart from past Star Wars films. A good guy has never been this bad before. In the other films the characters are either white hats or black hats. (This is where some will bring up Anakin. It’s very different because Anakin was never doing bad things for altrusitic reasons) That is not the case in Rogue One. People who had reservations about Han shooting first are likely to take umbrage with Andor and his actions early in the film. I’ve heard people refer to Cassian Andor as the Han Solo of Rogue One. He’s not. People have a tendency to put characters in a bucket with one of the others that have come before. It’s a mistake and a disservice to well written characters to do this. Han Solo is a fast talking, charming smuggler, which is the polar opposite of Andor, who is a (seemingly) cold and calculating soldier doing whatever it takes for the rebellion.

Also of note is Donnie Yen’s Chirrut Îmwe, stealing nearly every scene he’s in with his daredevil-like fighting prowess and zen-like optimism. Chirrut is the closest thing we have to a Jedi in Rogue One. I wouldn’t want to spoil his backstory but suffice to say this is with good reason. Also noteworthy is Ben Medelsohn as Orson Crennic who delivers a chilling performance, making me wish we’d gotten this same intensity from Domhnall Gleeson’s General Hux in The Force Awakens.

Star Wars fans have come to expect that we’ll have multiple films to explore new characters and that is Rogue One’s real problem. I wanted more time with characters like Cassian Andor, Jyn Erso, Saw Gerrera and Chirrut Îmwe. I wanted to see these characters journey prior to Rogue One. Unfortunately (or fortunately) the plot of Rogue One is utilitarian and has to operate at breakneck speed from the very beginning. The plot is literally life or death and there is precious little time to stop and smell the roses, which I appreciated. But the result is that the time we have with these characters feels truncated and left me wanting more. I’m sure that we’ll be getting a lot more of these characters via novels and comics and all the other avenues that Disney have in their arsenal for fans to get their Star Wars fix, but none of it is a suitable replacement for writers, actors and filmmakers all collaborating to bring a performance to life onscreen.

Going in, I was especially worried with how they were going to use Darth Vader in this film after early rumors indicated that we might see Vader in heavy action. It wouldn’t make sense that the very stiff looking Vader of A New Hope would be running around pulling ships out of the sky in action in Rogue One. I was happy to see how they handled Vader in the film. His last scene had me grinning like a fool.

Beyond Vader, it would have been very easy to fill Rogue One with too many nods to the subsequent Original Trilogy films. There are some great references in there, that will have fans excited, but it didn’t feel like they went over the line. This brings me to one of my main issues. Without revealing too much, there is a character in the film that has been brought back by use of CGI and it just doesn’t look right. I’m never that guy who whines about bad CGI, I’m usually pretty forgiving with that stuff, but this is a Star Wars film. Spend whatever you need to spend and take the time to make it look right. Or just don’t do it. As cool as it was that we were seeing this character, the CGI took me right out of it. I’m sure as a still shot the character it looks spot on, but in motion among real actors, it stuck out like a sore thumb. The rendering looked far too smooth and it felt like the dialogue would fall out of sync at any moment. There is another character brought to life with CGI that also bothered me a little, but at least it was brief. Less could have been more in both of these cases, though.

Ultimately, I had a great time with Rogue One. There is something in the film for every Star Wars fan. A credit to the cast and filmmaking team for actually expanding the Star Wars universe in a new and exciting way. I hope that Lucasfilm and Disney take note of what was accomplished with this film and apply what they’ve learned to other upcoming films under the “A Star Wars Story” banner. How cool would it be to have a television arm of Star Wars stories like this? An anthology series with wildly different types of stories that take place a long time ago in a galaxy far, far away? It’s big galaxy with a big sandbox, let’s get even more talented filmmakers in there and have some fun building things.

I’m sure you have your tickets already, if not get some. I can’t wait to give this one another look, or ten.

What an amazing time it is to be a Star Wars fan!