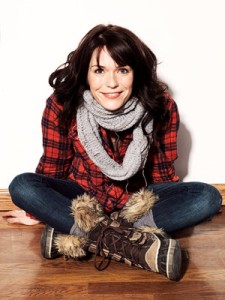 Most know Katie Aselton for her amazing comedic work on FX’s The League. (Seriously, how has she not received more recognition for her outstanding work?) A smaller number know her for her directing work on 2010’s The Freebie and 2012’s Black Rock, two films that she also starred in. The Freebie was a genuine surprise, a film that I went into with zero expectations and really loved, to the point that I saw it again the same day with a friend. I was pleasantly surprised at Aselton’s nuanced performance, as I had only really known her for her comedic work and her very early work with would-be husband Mark Duplass in The Puffy Chair. The Freebie impressed me overall with its sharp writing, directing and acting. It made me like Dax Shepard which, outside of Idiocracy, I never really had.  It was certainly among my favorite films that year.

Based on Aselton’s excellent work in The Freebie and my love for all things The League I’m genuinely excited to see that Aselton will be in town (They’re shooting in MA, in and around my very town) to shoot Gus Van Sant’s Sea of Trees starring Matthew McConaughey, Naomi Watts and Ken Watanabe.

Sea of Trees is the story of Arthur Brennan (McConaughey) who treks into Aokigahara, known as the Sea of Trees, a mysterious dense forest at the base of Japan’s Mount Fuji where people go to contemplate life and death. Having found the perfect place to die, Arthur encounters Takumi Nakamura (Watanabe), a Japanese man who has also lost his way. The two men begin a journey of reflection and survival, which affirms Arthur’s will to live and reconnects him to his love with his wife (Watts).

Shooting is already underway in Massachusetts and will continue in September in Tokyo, Japan.