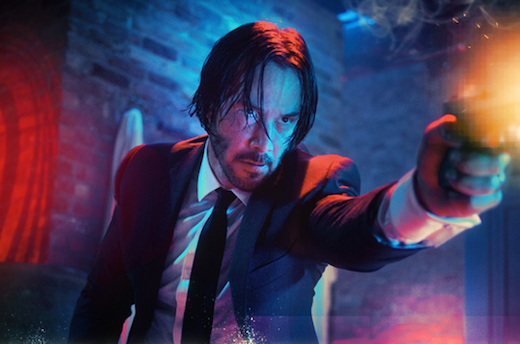 Show of hands, who here was surprised by John Wick? Directors Chad Stahelski and David Leitch (I’m not gonna keep saying “uncredited co-director”. They both deserve a heap of praise.) took what could have been a total cheesy failure and made something that critics and fans touted as a fun, violent action film that was sorely needed. Things seem to be getting increasingly better in 2015 as the success of the films has lead to other prospects, including re-teaming with the film’s lead actor, Keanu Reeves, for the live-action assassin series, Rain, in addition to their recently announcement attachment to direct lead actor Chris Pratt in the graphic novel adaptation of Cowboy Ninja Viking.

But just because the pair may move on to other projects doesn’t mean that they forgot which horse brought them to the race. John Wick is not without its merits for a sequel considering its caliber as an original property with a riveting story of one man’s vengeful return to his old life following the death of his inherited dog and theft of his car. According to an interview done with Movies.com, the two are indeed working on a script for a John Wick sequel.

“We have ideas for days and without blinking twice we know we can outdo the action from the original,” Stahelski said. He goes on to talk about how it’s the story that really matters, along with the character. If you don’t care about the actor and the character he plays and the story that goes along with it, the fans aren’t going to give two shits about how great the action is.

This guy gets it. This is exactly the road The Expendables franchise went down. Sure it’s fun to keep adding the action stars of yesteryear, but if the story is weak the fans will know and they will raise holy hell about it.

Now this doesn’t mean a sequel is a definite. Scripts get written all the time. Hopefully some of these ideas will materialize and solidify things for a much deserved sequel, because now the film has a fanbase, and the prospects for a much larger franchise seem to be getting better and better. Keanu Reeves hasn’t said a word about returning for a sequel, but consiering how this film pretty much turned his recent crappy box office streak around, he may want to get in on this now while the fans are still rabid for more.

Would you like to see the further expliots of John Wick? Sound off and let us know!