20th Century Fox has dropped three new posters for Josh Trank’s upcoming Fantastic Four. The new posters give us the usual photoshopped group image that looks like every other superhero poster. 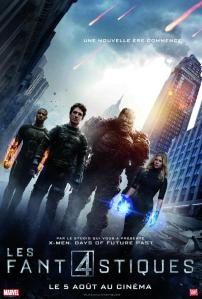 I’m hopeful that Trank’s film will surprise everyone and rise above all the negative press that’s hung over it like a dark cloud since early in the production. He’s got a great cast and is certainly capable to make a good film. Chronicle was a nice surprise, I’m hoping it wasn’t an aberration and that he’s able to take the next step with this one.

FANTASTIC FOUR, a contemporary re-imagining of Marvel’s original and longest-running superhero team, centers on four young outsiders who teleport to an alternate and dangerous universe, which alters their physical form in shocking ways. Their lives irrevocably upended, the team must learn to harness their daunting new abilities and work together to save Earth from a former friend turned enemy.