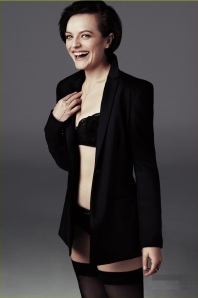 Looks like Elisabeth Moss is circling the female lead in True Detective season 2.

This comes hot on the heels of Vince Vaughn possibly joining as the main antagonist earlier today.

Colin Farrell and Taylor Kitsch are still the odds on favorites for the two other male lead roles.

Seems as though the cast is starting to come together, though HBO has yet to make any official announcements.

Moss would be a great addition to the cast. Moss is best known for the phenomenal work she’s done for the last six years on Mad Men as plucky advertising exec, Peggy Olson.

The Wrap reports that “the second season of “True Detective” will follow the death of Ben Caspar, the corrupt city manager of a fictional California city who’s found brutally murdered amid a potentially groundbreaking transportation deal that would forever change freeway gridlock in the state. Three law enforcement officers from different cities and branches of the government are tasked with finding out who did it. They soon discover their investigation has much broader and darker implications than they initially thought.”

Hopefully the pieces begin dropping into place and we get some official announcements soon.