One thing that I love about the Mission: Impossible series is how each film is different than the last. The reason for this is the directors. The series has a pretty great track record of selecting a visionary director each time out. The first film, directed by Brian De Palma was interesting and had some great, original scenes. M:I2 was a bit of a mess but a bold departure from the first. Then came JJ Abrams for the third film in the series. In my opinion this has been the high watermark in the series. From Abrams’ dynamic direction to Phillip Seymour Hoffman’s big bad Owen Davian, the film fired on all cylinders. Then Brad Bird came aboard for Mission: Impossible Ghost Protocol and delivered a hugely successful film that continued to build the series.

Now we have Christopher McQuarrie behind the camera for the fifth installment. I’ve enjoyed McQuarrie from the beginning, writing The Usual Suspects, as well as his directorial debut, The Way of the Gun. He was relatively quiet and then he busted back on the scene with the underrated Jack Reacher.

The first shots of the Impossible Missions Force appeared online today and something about the team makes me extremely happy. What do you think? Are you excited for M:I5? Let us know in the comments? 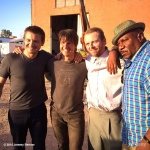