Last night John Williams, the greatest living composer (and the most Oscar nominated living person), took the stage in front of a sold out crowd to conduct the Boston Pops in a very special selection of Star Wars music. Williams is no stranger to the Boston Pops having served as the orchestra’s principal conductor from 1980-1993. Over the course of ninety minutes, the maestro conducted a varied selection of cuts from the Original Star Wars Trilogy as well as The Force Awakens, culminating with three encores, Yoda’s Theme, The Imperial March and finally a cut from E.T. 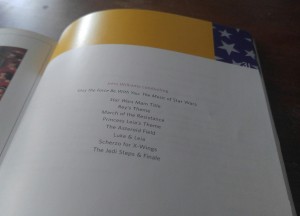 In between the music the soft spoken Williams addressed the enthusiastic audience, playfully recalling writing his Luke and Leia piece as a love theme before knowing any better. It was within one of these breaks in the performance that Williams discussed being asked by Kathleen Kennedy to score Rian Johnson’s currently in production, Episode VIII. Williams confided that he wasn’t sure he was up to it, but left the door open by saying that he doesn’t want anyone else to write music for Rey because he’d be jealous.

Speak of Rey, Williams also briefly spoke about her father. No, he doesn’t know who Rey’s absentee pop is, but he has an opinion, “I never asked J.J. Abrams who Rey’s father is, but I think it’s Luke Skywalker. Your guess is as good as mine, though.”

It would be crushing to imagine Williams not completing the next two films in the Sequel Trilogy, as he is as important a character to the Star Wars universe as Luke, Leia, Chewie or Han. I don’t think that it would be an understatement to say that new Star Wars films would not be the same without him. He’s slowed his output a bit over the years but I don’t want to imagine a world with no new John Williams scores. It’s sometimes tough to remember that he’s 84 years old since he’s still capable of working at such a high level.

I’m sure I’m not at all alone in holding out the hope that he has enough in the tank for a couple more trips to a galaxy far, far away…