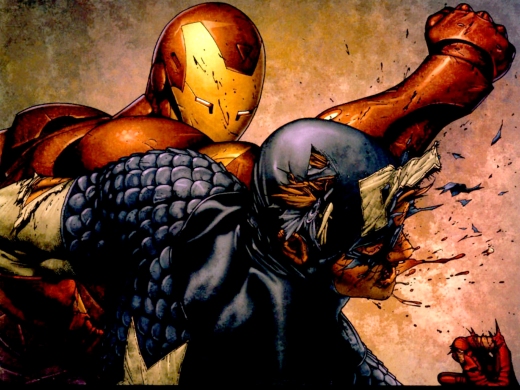 The other day we reported on a major casualty that will happen onscreen in Captain America: Civil War. Now, it would seem the teams for the epic battle have been chosen and Heroic Hollywood has the scoop as to who chooses what side.

As per usual, Major SPOILER alert if you want to go in blind and be surprised as to who goes where.

Still scrolling? Good, let’s get to it!

When Civil War comes to the Marvel Cinematic Universe, it will divide our heroes into two separate camps – those that think tighter regulations on super powered beings are needed and those that don’t. Like the Civil War comic series, Captain America will lead one team and Tony Stark will head up the other.

Team Cap will consist of the Star-Spangled Avenger himself, Hawkeye, Falcon, Scarlet Witch, Ant-Man and the Winter Soldier.

These teams make sense to an extent. Falcon is friends with Captain America, so his side was chosen before this was even an issue. Ant-Man has the mutual respect thing after fighting Falcon, so I can see him being swayed to the red, white and blue side. Hawkeye has a ton of respect for the original Avenger. And Scarlet Witch may still be holding some deep rooted resentment for Tony Stark, which would cause her to side with Team Cap.

Team Iron is much the same. Iron Patriot is to Iron Man what Falcon is to Captain America, so no-brainer there. Vision will probably see the logic in Stark’s arguments and not be able to really disagree with his creator. And Peter Parker probably idolizes Shellhead due to their similarities as scientists, so he can be easily swayed.

I’m not too sure about Winter Soldier and Black Widow. Widow and Cap make a great team and I don’t see her and Hawkeye going head-to-head again. And Winter Solider actor Sebastian Stan posted a photo to Instagram depicting that he sides with Robert Downey Jr., portrayer of Iron Man. Could that have been a swerve?

We know Black Panther will be neutral in these proceedings, and after the news dropped yesterday, who could blame him?

This is shaping up to be one hell of a knock-down, drag-out brawl. And we still haven’t even gotten word as to exactly how the supervillains will play into this! Civil War could be the biggest Marvel Studios film since the first Avengers film.