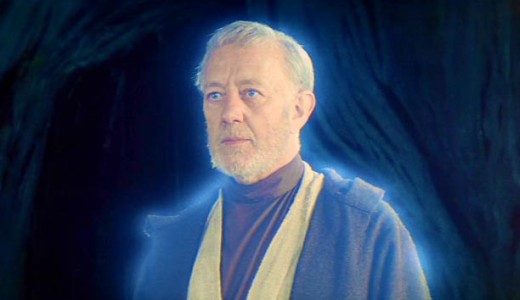 We’ve all heard about a couple of the major stars that had cameos in Star Wars: The Force Awakens. Actors like Simon Pegg and Daniel Craig had a few moments of screen time, even if they couldn’t show their recognizable mugs. But some of the coolest cameos came from a couple of lines that might have gone right by everyone’s radars.

Entertainment Weekly spoke with director J.J. Abrams after a screening for the Writers Guild of America and got the lowdown on how they had Yoda and two generations of Obi-Wan Kenobi make guest voice appearances.

The following contains SPOILERS for those who haven’t seen The Force Awakens yet, so you have been forewarned:

Still here? Cool. So during the scene at Maz Kanata’s castle/watering hole, Rey does some exploring, prompted by a voice that she faintly hears. While inspecting a room she finds a crate containing Luke Skywalker’s lightsaber. When she touches it she’s transported through time and space, visiting the hallway where Luke squared off against Darth Vader from The Empire Strikes Back, watching a possibly cloaked Luke give R2-D2 the means to find him, seeing Kylo Ren and the Knights of Ren and even reliving when she was abandoned on Jakku.

We asked Ewan McGregor to come in and do the line. And he was awesome and we were very grateful. He was incredibly sweet and handsome, and all that stuff. Then he rode off on his motorcycle. Literally the coolest voice over actor ever.

But how did this happen if Guinness has been dead for over 15 years? It’s pretty cool.

When Abrams first heard it, he thought it was just McGregor’s voice being manipulated to sound like Guinness’.

I said, “That’s cool, is that the thing from Ewan McGregor?” He said “No, we took a line from Alec Guinness saying ‘Afraid.’” They cut it, and you hear the performance – he’s saying it the way I would have begged Alec Guinness to have said it. It is so crazy perfect. So when you hear Obi-Wan talk to Rey it is both Alec Guinness and Ewan McGregor doing the voice.

And even Frank Oz got in on the fun, doing some lines as the diminutive Jedi master Yoda:

He was incredibly generous and came in to Bad Robot, where we had a recording area, and he was doing Yoda, saying a number of lines we gave to him. This whole experience has been one outrageous moment after another. Just watching Frank Oz, you look at him and talk to him and his voice is very deep. I don’t know why I would have thought he sounded like Miss Piggy!

Now that’s a neat little nod to the past!